Oh, Labor Day weekend, you are the best thing about not being a teacher any more. I used to hate this holiday, because why would you like a holiday that is all about having a stomachache? But now, since I have ceded the 8 week summer vacation (ok, ok, I still had a pretty good summer), 3 days off in a row, especially when Cape Cod is at its most lovely, well, that does not give me a stomachache at all.

A side note: teachers are always saying that they don’t really get summers off, but in my experience, that is just something we said so you didn’t feel bad. Because I remember watching tv sometimes all day in July, just because I could. Then sometimes I had a popsicle and went for a bike ride. Not now though.

Anywho. Leah’s fam went to the Cape and I went back and forth on weekends and saw them all, and we had a lovely time. Spending that much time with your kids reminds you of just how different they are.

Grandpa: Who wants to come with me to the dump?

Grandpa: Abe, you can come.

Grandpa: Hey, Max, do you want to come, too?

Max: (not looking up from the picture he is drawing) No, thanks. I don’t like things that smell.

So it was no surprise when today, at the Truro Ag Fair, they chose way different things for face painting. See below: 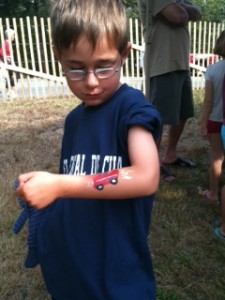 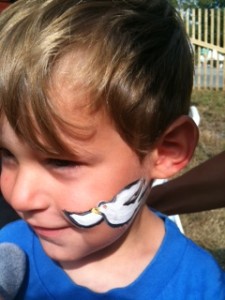 Especially because seagulls (that’s what is on Abe’s face) love the dump so much.

Onward we went through the Fair. A Pie-Eating Contest was announced. Max was super excited, but then he said, “If it’s winning and losing, I don’t want to do it. I just want to watch. And maybe next time I’ll enter.” We explained that there was just one, and the guy running it said he would get a ribbon, and I said that he would get half a pie (yeah, that’s a little too much pie for kids, but, still, there it was), but he calmly declined.

Abe was not jumping around like a maniac. After all, it was just a pie eating contest, not a trip to a stinky dump. But, in a strangely businesslike way, he agreed to do it. Max offered to “coach” him, which mostly meant sitting very near him and yelling.

The organizers put down a sheet of paper and Abe assumed the position: 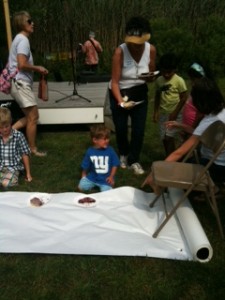 Abe looked very small, in part because the other kids were all about 12. They had to lie down with hands behind backs, which pissed Abe off because it made his face go into the pie, but he complied. Again, ice water in the veins. We prepared ourselves for him to cry – another kid did – yeah, that’s right, a 12 year old cried in a pie-eating contest and Abe wore his game face the whole time. Ha ha.

And the gun went off, and Abe slowly, confidently, gnawed away at that pie. Max cheered him on from right behind, ever the supportive older brother. He had made it through about half of the half – in maybe 3 minutes – when one of the big kids was declared the winner. Hmm, we thought, we should no take him for a ride in the new car just yet. Because he will throw up.

He picked himself up, slyly wiped his face on Max’s shirt, and headed to us to pose for pictures. 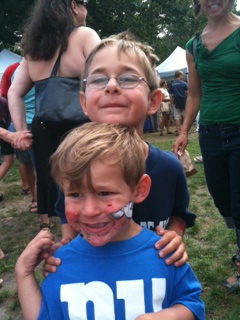 This really doesn’t do it justice. He was purple before he rubbed his face all over Max. Note that he somehow preserved the seagull.

He then said that he wanted cake, but we talked him into looking for a pony ride, figuring that he could throw up on a horse without our having to detail it afterwards.He insisted that he was hungry. We tried to ignore him. My father in law wandered off to pick up a dozen littlenecks, a food that is so good that I am glad my kids don’t yet like it, and Abe, of course asked for one. He poked it with his tongue, declaring, thankfully, “Yuck. Now I am full.”

This entry was posted in Uncategorized. Bookmark the permalink.